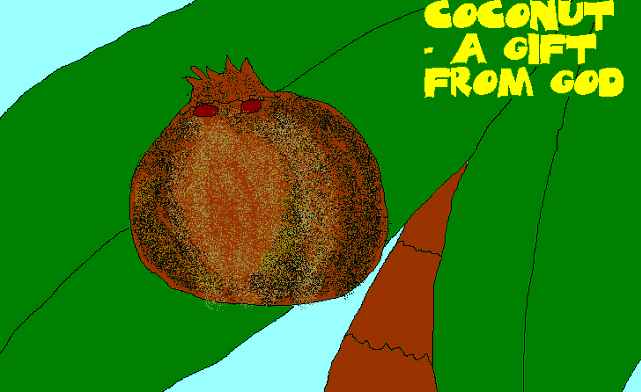 Imagine a food you can use everyday that helps to protect you from the “Big 3” (heart disease, cancer, diabetes). What if it also improved your over-all health such as strengthening your immune system, optimising your digestive system and even preventing viral, bacterial and fungal infections?

This SUPERFOOD also provides increased energy by promoting metabolism, and nutrient absorption, in fact it is a powerhouse of important nutrients and factors necessary for optimal health! As well it also helps with weight loss.

Revered by Pacific Islanders for thousands of years, used by many other cultures around the world.

But this is not so with coconut oil.

It is the health promoting effects of Medium Chain Fatty Acids that make coconut oil and the other tropical oils so valuable to us.

The information presented above was sourced from the book:

THE HEALING MIRACLES OF COCONUT OIL by Bruce Fife, N.D.

I strongly recommend this book to anyone interested in natural health and wellness. This book has answered a few questions and opened my eyes to more of the truth about essential fatty acids.

I am also interested in coconut oil as a food having been to the Pacific Islands on three occasions.

My last trip was a missions outreach to a remote village in the mountainous region of Espiritu Santo, the biggest island in the Vanuatu group.

Here we were fed a daily diet of the local fare which mainly consisted of foods prepared from manioc, taro or banana. Nearly everything is coooked in coconut oil or milk.

The diet can be limited at times and is largely made up of carbohydrates.

When the locals are thirsty they pop into the bush and return a few minutes later with a green coconut. The top is peeled with a bush knife and the juice inside is cool, refreshing and highly nutritious. I call it bush lemonade.

I observed that the people were physically fit, strong and energetic. The elderly man who insisted on carrying my pack was at least 60+, bare foot and smoked.

Obviously the lifestyle, which involves heavy work carrying food from gardens and labouring on the hillsides, contributes to the level of fitness I saw up in the village.

But their strength and fitness seemed to this observer to be excellent.

There were no signs of obesity that I saw, and the general health appeared average, even good by our Western standards.

Again, lifestyle, and culture play a major part in the health and longevity of the people, some of it negative, some positive. For example, the villagers live very close to nature, in fact the village is one big farm yard, with manure underfoot. I would say hygeine was not a major priority, and therefore, infectious diseases may play a greater role, however, I did not see any signs of serious illness.

As to longevity, I was told the Chief’s father was a ripe 119 years old. I was staying next door to this elderly man and he sure looked old although he seemed to have his faculties and was not unencumbered in any way. I questioned the age and was assured by the Chief’s son who is very well educated that his grandfather was indeed that age. Also, it was not rare amongst their people for such age to be reached.

In my opinion, longevity and health have as common denominator the diet, which as noted is very high in coconut oil. The villagers have had slight exposure to Western food, although this is changing rapidly which is very sad. Researchers have shown in every case that indigeneous peoples exposed to a Western diet quickly succumb to degenerative disease, such as diabetes and cardiovascular disease.

Go to Amazon.com to order Bruce Fife’s book. It is money well spent.